The Royal National Lifeboat Institution (RNLI) has today – Wednesday 6 March 2019 – announced that its new Chief Executive will be Mark Dowie.

Mark is currently the Lifeboat Operations Manager at Salcombe RNLI in Devon, a voluntary role that he has held proudly since 2017, and will take up the post of Chief Executive of the lifesaving charity on Wednesday 15 May 2019.

In his role as a Lifeboat Operations Manager, Mark has been responsible for all the operations of a busy lifeboat station, and so he has first-hand experience of leading and volunteering within the RNLI.

Mark brings with him significant corporate leadership experience, having been a senior banking professional who was most recently Chief Executive Officer, Corporate & Institutional Banking, at Standard Chartered Bank. In this role he led the bank’s global wholesale banking business and was responsible for nearly 20,000 people in 62 countries around the world.

A former Royal Navy Supply Officer, Mark served between 1982 and 1990, leaving the service at the rank of Lieutenant. During his time in the Royal Navy, Mark served on the helicopter carrier RFA Reliant and HMS Illustrious.

In addition, Mark has owned and managed a successful marine services company and served as a magistrate in Devon. He is a keen sailor and a gyrocopter pilot.

Mark is also a trustee of the Royal Navy and Royal Marines Charity (RNRMC) and has provided leadership and financial support to youth charities in south London and a school and orphanage in Kenya.

Mark said: ‘I am delighted and incredibly proud to have been appointed as the RNLI’s new chief executive.

‘Having been an RNLI volunteer on the coast for the past two years, I know just what an incredible organisation this charity is. I’ve seen first-hand the dedication and commitment of the RNLI’s volunteers and staff to help save lives and keep people safe.’

‘Mark has a range of impressive attributes and experience that he will bring to the role, including valuable experience as an RNLI volunteer.

‘He has a wealth of corporate leadership experience and a real affinity for the sea. I’m looking forward to working with Mark and am extremely confident that he will be a huge asset to the RNLI.

‘I’d also like to profusely thank our current Chief Executive, Paul Boissier, for his magnificent contribution over the last decade. He will leave the RNLI having achieved so much.’

The RNLI’s current chief executive, Paul Boissier, has been in post since 2009 and will leave the RNLI on Wednesday 15 May. 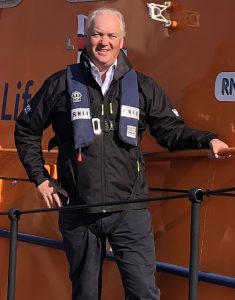