For Salcombe lifeboats the Bank Holiday week was a tale of two halves, on the water there was a response to three requests for help.
The first saw the ILB launch to investigate a report of paddle boarders and swimmers in difficulty near Start Point. Once on scene the shout proved to be a false alarm, with good intent.
The second call saw the ILB responding to a call for help from a 25ft yacht south of Soar Mill Cove that had found himself with a prop caught up in lobster pots. Once freed by the crew of the lifeboat he was assisted in getting into Salcombe Harbour.
In the early hours of Thursday morning the ILB was called to a medical emergency aboard a yacht moored off Ditch End. Casualty was taken ashore to a waiting ambulance for transfer to hospital.
Sunday and off the water things got just a little busier with an RNLI team taking part in a well-attended ‘Touch Rugby’ event at North Sands, organised by Matt Powell and Salcombe Gin Distillery® to raise funds for Salcombe RNLI Lifeboats.
Some 16 teams joined in the fun along with well known ‘referees’ David Flatman, Danny Grewcock, Kai Horstmann and James Parkes.
With the event aimed at being a fun day the main winner was Salcombe RNLI Lifeboats with, more than £2000.00 being raised.
A special thanks goes to Matt Powell and Salcombe Gin for organising the event along with sponsors Crew Clothing, Ribeye Boats, Pol Roger and Yeti @Stone Boatyard. 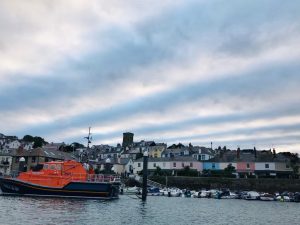 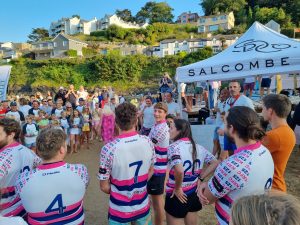